Is Cooking In Aluminium Vessels Harmful 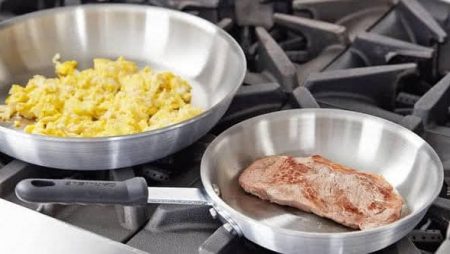 Aluminium is an instrumental metal. It’s lightweight, inexpensive, and durable, so it can be used as a cooking utensil without breaking the bank. But what about health problems? Is aluminium dangerous to cook with? Cooking in an aluminium vessel has been a topic of debate for years. Some say it’s harmless, while others claim that the process can be harmful to your health.

In this blog post, I will discuss some of the dangers and effects of cooking in aluminium vessels, as well as looking at more recent studies which show that cooking food in an aluminium vessel may not be such a bad idea after all. We will also highlight what precautions can be taken to reduce any potential risks.

Is Cooking In Aluminium Utensils A Concern?

Aluminium conducts heat quickly and evenly, so your food cooks faster than other types of metal. It won’t react with acidic foods like some other metals do which means no more worrying about whether your sauce will turn out right. And because it doesn’t rust or corrode quickly, these utensils are dishwasher-safe, so cleanup is easy peasy.

The FDA has also studied the issue and found that cooking with aluminium does not pose any health risk. In fact, they say it’s safe to cook with aluminium utensils as long as you don’t use them over high heat or leave them sitting in food too long. 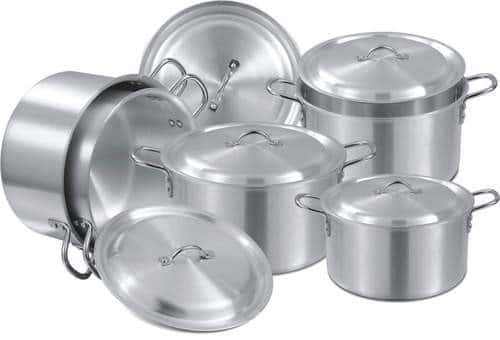 For instance, if you measure a saucepan before and after use, there will be no difference between them because all metals are leached at about the same rates – even stainless steel! So when it comes to cooking in aluminium, you shouldn’t be concerned about the metal leaching into your food.

But this doesn’t mean that there are no health risks associated with using an alloy of aluminium because some people are more susceptible than others and should avoid contact entirely if possible. Let’s have some dangers associated with it.

Apart from the above mentioned uses of aluminium utensils, a number of concerns have also come to light. It causes pathological effects on the human body due to its leaching from utensils with long-term use, which has been associated with certain clinical conditions.

This metal can cause serious health problems. It has been linked to Alzheimer’s disease, Parkinson’s disease, and other neurological disorders. The FDA has also found it in the breast milk of nursing mothers who use aluminium cookware. 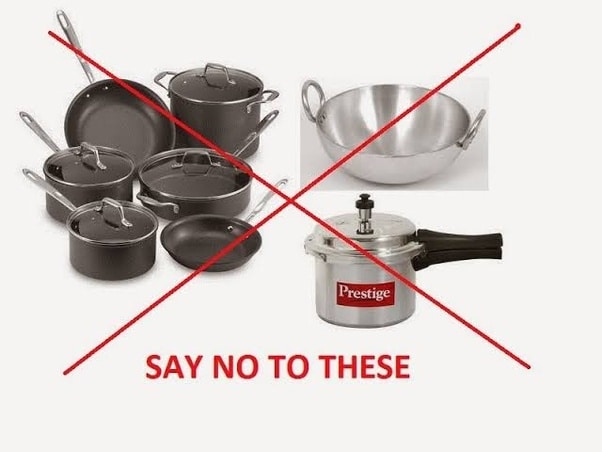 It is recommended that if you don’t want to be the next victim of such diseases, make sure you stop using aluminium utensils today. They’re not worth the risk. Get yourself some stainless steel or wooden ones instead.

Why Aluminium Is Not Considered Suitable For Cooking?

If your immune system is relatively weak, or you have certain contact-related health risks higher, you should avoid eating the food cooked in aluminium utensils. It tends to react with acidic foods. The reaction produces hydrogen gas, which can cause food to foam and boil over. This foaming action also causes the aluminium to corrode more quickly than other metals. 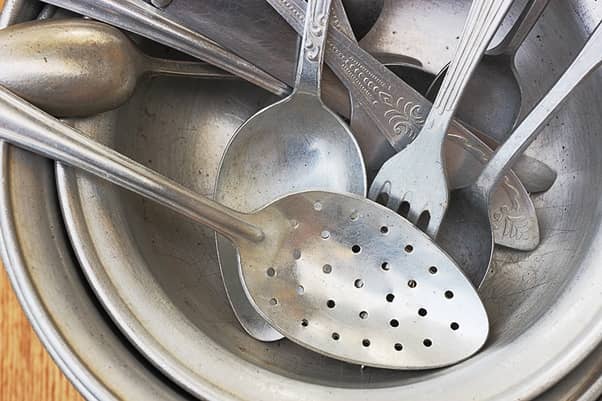 What Are The Alternatives Of Aluminium To Carry Out Safe Cooking?

It would be best if you use stainless steel or cast iron utensils when cooking with acidic foods such as citrus fruits, tomatoes, wine, or vinegar. These materials will not react with your food, and they do not corrode easily like aluminium does.

Also, they are safer to handle than hot pans made of metal that have been in contact with acid-based ingredients. Try using non-stick cookware set instead of aluminum pots and pans.

Can I Boil Milk In The Aluminium Vessel?

An aluminium vessel can be used for boiling milk. It is lightweight and heats evenly. Still, it is recommended to use stainless steel to avoid leaching of aluminium.

The European Union (EU) has recently decided to ban all non-stick coatings containing PFOA or PFOS from use in cookware sold within its borders. This means that any new cookware made after June 18th, 2018 will not be able to contain these chemicals.

For those who already own an aluminium pot or pan, there are some simple steps you can take to reduce your exposure risk when cooking with it by following these guidelines from the Environmental Protection Agency (EPA).

Aluminium is a metal that has been used for centuries to make pots and pans. It’s lightweight, durable, and conducts heat well. Are you aware of the risks associated with cooking with aluminium? It has some drawbacks that make it less than ideal for cooking.

It can react with acidic foods like tomatoes or lemons to create an unpleasant metallic taste, and it can also cause your food to stick to the pan more easily.